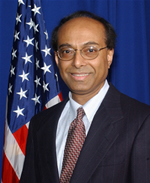 Dr. Abdul Mabud is Director of the Scientific Services Division (SSD) of the Alcohol and Tobacco Tax and Trade Bureau (TTB). As the chief technical officer of the bureau, he advises TTB management and program offices on developing science-based policies and on technical issues for regulatory compliance and enforcement. As Director, Dr. Mabud leads and directs the Division's mission of providing comprehensive technical support to all TTB programs in line with the Bureau's goals of consumer protection and revenue collection. He leads and directs the operations of the four TTB laboratories: Beverage Alcohol Laboratory (Beltsville, MD), the Nonbeverage Products Laboratory (Beltsville, MD), the Tobacco Laboratory (Beltsville, MD), and the Compliance Laboratory (Walnut Creek, CA). The SSD laboratories provide analytical support and technical opinion to TTB Program Offices and the regulated industries. Under his leadership, TTB has built state-of-the-art regulatory analytical laboratories. In 2007 the Beverage Alcohol Laboratory and the Compliance Laboratory received ISO 17025 accreditation. Dr. Mabud went on to establish the Tobacco Laboratory of TTB in 2008, which received its accreditation in 2009, followed by accreditation of the Nonbeverage Products Laboratory in 2015.

Dr. Mabud began his Federal career with the Bureau of Alcohol, Tobacco, and Firearms (ATF) in November 1998, as a senior chemist at their National Laboratory Center, and was promoted to the position of Chief, Beverage Alcohol Section, in January 2000. In 2003, Dr. Mabud joined TTB as the Chief of the Beverage Alcohol Laboratory (BAL), and was promoted to his current position in December 2005.

Prior to joining ATF, Dr. Mabud served in the private sector for 11 years. In 1987, he joined the Washington Research Center of W.R. Grace & Co, a multinational chemical company, as a research analytical chemist, and left W.R. Grace in 1998 as a senior scientist.