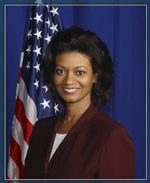 Gail H. Davis is the Deputy Assistant Administrator for the Office of Headquarters Operations. She recently worked on several months-long  assignments as the Acting Assistant Administrator for the Office of Headquarters Operatons and the Office of Permitting and Taxation in the Alcohol and Tobacco Tax and Trade Bureau (TTB) followed by a detail assignment to the Office of External Affairs/ Chief of Staff, where she was spearheading the coordination of several high priority bureau projects, including initiatives relating to modernizing and integrating TTB systems and working to improve digital service delivery across all of TTB’s online platforms, including TTB.gov, through improved understanding of and engagement with external stakeholders.

Since 2013, Gail served as the Deputy Assistant Administrator of Headquarters Operations to plan, oversee, and implement key Bureau programs for Headquarters Operations. Prior to that, Ms. Davis was the Director of the International Trade Division. In this capacity, she provided technical assistance on the administration of U.S. alcohol and tobacco tax and trade law to the Office of the United States Trade Representative and other government, foreign, and private entities. During her tenure, she led the division in initiating critical collaborations with many of our foreign counterparts. While handling these duties, Ms. Davis was also instrumental in facilitating Headquarters alignment with TTB's Balanced Scorecard initiative, which is an integrated strategic planning and performance management system for the agency.

Before joining TTB, Ms. Davis served a 15-year tenure at the Bureau of Alcohol, Tobacco, Firearms and Explosives (ATF) where she most recently was the Chief, Public Safety Branch, with responsibility for the administration of Federal Explosives Law as it relates to the safe and secure distribution and storage of explosive materials in the United States. Ms. Davis' career with ATF also included practical experience in the development of alcohol and tobacco regulations as a specialist in the Distilled Spirits and Tobacco Branch. Additional promotions included positions in the ATF Office of Public Information and the Office of Legislative Affairs where Ms. Davis worked directly on issues affecting the alcohol and tobacco industries. Prior to assuming the helm of the Public Safety Branch, she was Chief of Staff for ATF's Office of Science and Technology.