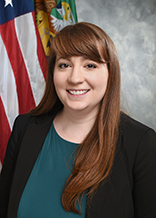 Karen Welch was appointed Director of the International Affairs Division (IAD) of the Alcohol and Tobacco Tax and Trade Bureau (TTB), effective on June 25, 2017. Prior to her appointment, Karen was the Acting Director of IAD since March 3, 2017.

Karen arrived at TTB in 2008 through the Presidential Management Fellows Program, and soon became the Program Manager for International Issues.  In addition to carrying out her Program Manager duties, Karen was also splitting her time with the Regulations and Rulings Division.

While at TTB, Karen has managed Bureau activities relating to the European Union and its Member States, and coordinated Bureau activities relating to the World Wine Trade Group as well as negotiations on the Transatlantic Trade and Investment Partnership and Trans-Pacific Partnership.  In her time at TTB, she has frequently provided technical advice concerning the impact of international agreements on Bureau regulations.