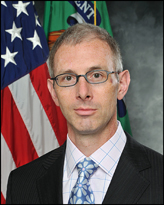 As Congressional Liaison for the Alcohol and Tobacco Tax and Trade Bureau (TTB), Tom Hogue works closely with individual Members of Congress and with those House and Senate committees that have appropriations, authorization, or oversight authority over TTB.

As Director of the Office of Congressional and Public Affairs, he is also TTB's point of contact for all media inquiries.

Tom began his career in 1991 as an inspector with Bureau of Alcohol, Tobacco and Firearms (ATF), subsequently serving as an explosives regulatory specialist before joining ATF's Office of Legislative Affairs in 2000. He has been TTB's Congressional Liaison since 2005.