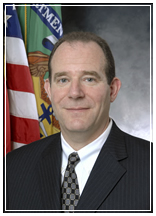 Allen S. Leftwich serves the Alcohol and Tobacco Tax and Trade Bureau (TTB) as the Director of the Tax Audit Division. Tax Audit's mission is to verify the proper payment of alcohol, tobacco, firearms and ammunition excise taxes and ensure compliance with laws and regulations by taxpayers in a manner that protects the revenue, protects the consumer, and promotes voluntary compliance with the Federal Alcohol Administration (FAA) and Internal Revenue Code (IRC) laws.

Mr. Leftwich graduated from Pennsylvania State University with a bachelor's degree in Accounting in 1985. He is a Certified Public Accountant (CPA) and a Certified Fraud Examiner (CFE).