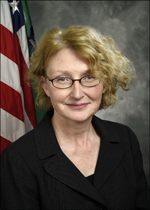 Amy Greenberg is the Director of the Regulations and Rulings Division (RRD). As Director, Ms. Greenberg oversees the development of regulations, rulings, guidance, and procedures to implement TTB's statutory responsibilities.  She also oversees the program areas responsible for addressing TTB's obligations under the Paperwork Reduction Act of 1995, and for responding to requests for information under the Freedom of Information Act (FOIA) and Privacy Act of 1974.

Ms. Greenberg came to TTB in 2004 as a Presidential Management Fellow. She has worked in RRD as a Regulations Specialist, Tobacco Program Manager, and Assistant Director. In 2010, Ms. Greenberg won the TTB Administrator's Award for her regulatory work, including work on TTB's implementation of the tobacco-related provisions of the Children's Health Insurance Program Reauthorization Act of 2009 (CHIPRA).