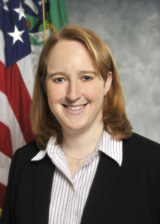 Elisabeth Kann currently serves as the Acting Deputy Administrator for the Alcohol and Tobacco Tax and Trade Bureau. She also maintains her role as Acting Assistant Administrator for the Office of Headquarters Operations where she oversees TTB's Alcohol Labeling and Formulation Division, International Affairs Division, Regulations and Rulings Division, and Scientific Services Division.

Prior to her current assignment, Ms. Kann was appointed Assistant Administrator External Affairs/Chief of Staff of TTB in August 2018. In this role, Ms. Kann ensured proactive coordination of Bureau-wide priorities, policies, and internal and external communications.  She also supported the strategic management of the Bureau through strategic planning and performance management, including the effective use of data and analytic tools to facilitate overall efficiency and effectiveness. Additionally, Ms. Kann was responsible for managing the Offices of Communications, Industry and State Outreach, Congressional and Public Affairs, Strategic Planning and Program Evaluation, and Analytics.

Ms. Kann joined TTB in 2010 as a Presidential Management Fellow in the Regulations and Rulings Division, where she served from 2010 to 2012. Immediately preceding her appointment as Chief of Staff in 2013, Kann served as Special Assistant, Office of the Administrator, where she advised and assisted the Administrator and Deputy Administrator on a broad variety of sensitive and complex matters spanning TTB's authority. Before beginning her federal career at TTB, Kann was a litigation attorney in the New York office of Kaye Scholer LLP, where she specialized in complex commercial and securities fraud litigation.

Ms. Kann graduated from Dartmouth College, majoring in English Literature.  She also earned a Juris Doctor degree from the Benjamin N. Cardozo School of Law at Yeshiva University and a Master in Public Administration degree from the John F. Kennedy School of Government at Harvard University.