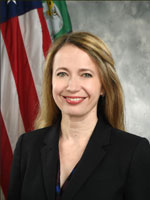 Ms. Christian joined TTB in 2011 as a Presidential Management Fellow in the Advertising, Labeling and Formulation Division. Prior to her current appointment, she served as a Policy Advisor to Headquarters Operations for two years. In that role, she worked on a broad array of policy issues ranging from emerging products to improving internal efficiencies.