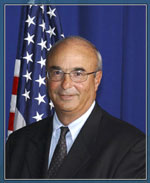 Secretary of the Treasury John Snow appointed John Manfreda as the Administrator of the Alcohol and Tobacco Tax and Trade Bureau (TTB), effective January 4, 2005. Prior to this appointment, Mr. Manfreda served as TTB Deputy Administrator, since the Bureau's founding in January 2003.

As Administrator, Mr. Manfreda oversees the collection of $23.5 billion per year in federal alcohol, tobacco, and firearms and ammunition excise taxes, as well as the permit systems and regulations established for those industries under the authority of the Internal Revenue Code and the Federal Alcohol Administration Act.

Mr. Manfreda brings many years of experience in alcohol and tobacco law and regulation to this post. Prior to his appointment as TTB Deputy Administrator, Mr. Manfreda was chief counsel for our predecessor agency, the Bureau of Alcohol, Tobacco and Firearms (ATF), from 1999 to 2003. In total, Mr. Manfreda was with the ATF Chief Counsel's office or its Internal Revenue Service predecessor for 33 years, beginning as a staff attorney in July 1970 and serving as Associate Chief Counsel for Alcohol and Tobacco from 1978 through 1996. During his tenure with ATF, Mr. Manfreda was the principal author of the Distilled Spirits Tax Revision Act, and he has represented TTB or ATF before congressional committees and in contacts with federal and state agencies, trade associations, and public interest groups.

Mr. Manfreda is the recipient of the Meritorious and Distinguished Presidential Rank Awards, as well as the Lifetime Achievement Award from the Bureau of Alcohol, Tobacco and Firearms.

A native of the District of Columbia, Mr. Manfreda enjoys carpentry and completing home remodeling projects. He and his wife have three grown children and nine grandchildren.