A sulfite declaration is a statement on labels of wine that informs the consumer that the wine contains sulfites or sulfiting agents. The statement is required where sulfur dioxide or a sulfiting agent is detected at a level of 10 or more parts per million (ppm), measured as total sulfur dioxide. For purposes of this guidance, the term “sulfites” is used to include sulfur dioxide and sulfiting agents. Sulfites are preservatives widely used in winemaking, and some people have sensitivities to sulfites. The labeling requirement is intended to alert those people to the presence of sulfites in wines. 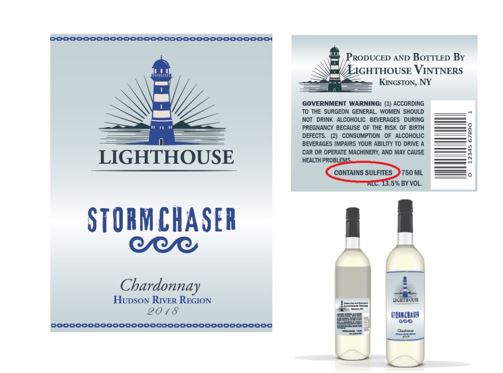 In this example, the sulfite declaration appears on the back label of the product.

What are the formatting requirements?

The minimum type sizes apply to each numeral, symbol or letter in the statement, including both upper-case and lower-case letters.

NOTE: “Sulphites” may be used in lieu of “sulfites” in mandatory and optional sulfite declarations.

What are the labeling rules if my wine contains less than 10 ppm sulfur dioxide?

Labels of wines that contain less than 10 ppm of total sulfur dioxide are not required to bear a sulfite declaration. However, we will not approve a label for a wine (other than an agricultural wine) that does not include a sulfite declaration, unless the applicant presents a sulfite analysis conducted by a TTB laboratory establishing that the wine contains less than 10 ppm sulfur dioxide (see How do I submit samples to TTB for sulfite testing). We commonly refer to this as a sulfite waiver or sulfite labeling waiver. You should not submit the application for label approval until you have received the TTB laboratory results confirming that the wine contains less than 10 ppm total sulfur dioxide.

NOTE: While laboratory analyses are not required to be submitted with an application for label approval for an agricultural wine whose label bears no sulfite declaration, it is nonetheless the responsibility of the label applicant to ensure that the agricultural wine is properly labeled with a sulfite declaration if the wine contains 10 or more ppm of sulfur dioxide.

Depending on what the lab results show, a wine may be labeled with the following optional labeling statements.

When the TTB lab report shows less than 10 ppm sulfites:

When the TTB lab detects no sulfites:

NOTE: TTB does not permit statements such as “sulfite free,” “free of sulfites,” or “contains no sulfites.”

How do I submit samples to TTB for sulfite testing?

We only accept test results from TTB laboratories for sulfite labeling waivers. We do not accept sulfite laboratory analyses from any other source, including from chemists at private laboratories who are certified by TTB to perform chemical analyses for export.

A U.S. wine producer, bottler, or importer may request a sulfite analysis by submitting the following:

Send both to the appropriate TTB laboratory:

NOTE: Federal law prohibits sending alcohol beverages via the U.S. Postal Service through the mail, either domestically or internationally (18 U.S.C. 1716(f)). Instead, use a common carrier or courier service when shipping your sample to the lab and follow that carrier's posted guidelines regarding the shipment of alcohol.

After receiving the letter and sample, the TTB laboratory will complete testing, generally within 10 days from sample receipt, and send an official report to the submitter. The bottler or importer should submit or upload the TTB laboratory report with the applicable application for label approval as evidence that a mandatory sulfite declaration is not required to appear on the label.

How often do I need to submit samples for sulfite testing if there is no sulfite declaration on the label?

In general, we require samples to be submitted for sulfite testing in connection with the submission of an application for label approval. However, this does not mean that an industry member may indefinitely rely on a single analysis of its product by the TTB Laboratory as justification for not including a sulfite declaration on a wine label.

The testing of wines (other than agricultural wines) that do not include a sulfite statement on the label is one step that we undertake, prior to the issuance of a COLA, to provide some level of assurance that sulfur dioxide is not detected at levels of 10 or more ppm in the wine. It remains the responsibility of all industry members to ensure that wines, distilled spirits, and malt beverages are labeled in accordance with TTB regulations. A bottler or importer who obtains a COLA after submitting a sample for sulfite analysis has an ongoing responsibility to ensure that its product is properly labeled with a sulfite declaration if it contains 10 or more ppm of total sulfur dioxide.

Industry members should note that changes in the method of production of a wine may affect the sulfite content of the product. Additionally, levels of naturally occurring sulfites may vary between product batches, production cycles, or vintages. If industry members are in doubt as to the effect of such changes on the sulfite content of their products, they may submit a new request for a sulfite waiver analysis to the TTB Laboratory, even when such an analysis is not in connection with a new application for label approval. Again, the industry member bears the ultimate responsibility for properly labeling wines (and other alcohol beverages) with a sulfite declaration, and TTB’s testing of a single bottle does not represent a finding that every batch of that product contains less than 10 ppm of total sulfur dioxide.