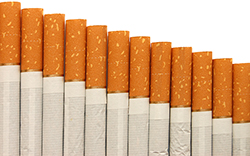 On Wednesday, May 31, 2017, the United States Attorney's Office for the Eastern District of Missouri announced that a federal grand jury has returned an indictment charging thirty-five individuals with various counts of conspiring to traffic in contraband cigarettes, conspiring to distribute controlled substances/analogues and money laundering.

If convicted, defendants are facing maximum penalties of 5 years to 20 years in prison and/or fines up to $1,000,000.

A copy of the press release may be found on the United States Attorney's Office for the Eastern District of Missouri website.