Eliot Ness was born in Chicago, on April 19, 1903, to Peter and Emma Ness. Eliot attended Chicago's Fenger High School. He later entered the University of Chicago where he graduated in 1925 as a major in Business Administration and Political Science.

After graduation he worked as an investigator for the Retail Credit Co., of Atlanta. He was assigned to the Chicago territory where he conducted background investigations for the purpose of credit information.

In 1926, his sister's husband, Alexander Jamie, an FBI agent, influenced him to enter law enforcement. He later accepted an appointment as an agent with the U.S. Treasury Department's Prohibition Bureau during a time when bootlegging was rampant throughout the nation. He headed a Federal enforcement unit, which covered Illinois, Indiana and Wisconsin. This unit was very successful in developing cases and obtaining prosecutions against those engaged in illegal activities, including the notorious mobster Al Capone. Many years later this unit's exploits became a household word through the novel, "The Untouchables," by Oscar Fraley, and the subsequent TV series and movies by the same name. In 1933, after the Prohibition Act had been repealed, this unit of special agents was disbanded, with many returning to their previous assignments or remaining in Chicago. Ness was transferred to Cincinnati in 1934, becoming Investigator in Charge and was later transferred to Cleveland in 1935. 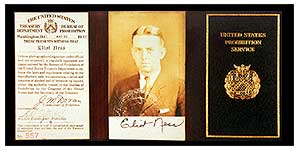 In 1935, Mayor Harold H. Burton of Cleveland, Ohio, asked Ness to become Cleveland's Director of Public Safety over the Police and Fire Departments and the city's Building Division. He did a commendable job until 1942, when he resigned to re-enter government service.

The United States was in a state of national mobilization and World War II was in full swing. Ness applied for and was appointed the director of the Social Protection section under the Federal government's Defense, Health and Welfare Service. Responsibilities of this position were immense, combating social problems, which existed on military bases throughout the nation and establishing a rehabilitation program to deal with these problems. For his outstanding leadership in this field he received the Navy's Meritorious Service Citation.

In 1944, Ness resigned to return to private business as the chairman of the board of the Diebold Safe Co., in Ohio. From this time until his death in 1957, he led a quiet life as a successful businessman, participating in several business activities.