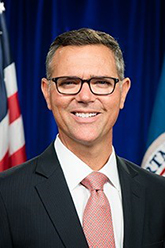 Nicholas Colucci serves as the Acting Deputy Administrator of the Alcohol and Tobacco Tax and Trade Bureau (TTB). He also maintains his role as the Assistant Administrator, Field Operations where he is responsible for oversight, direction and coordination of all Field Operation functions associated with TTB’s tax collection and consumer protection programs. He joined TTB in February 2019.

Mr. Colucci most recently worked for the Department of Homeland Security (DHS) where he served as the Deputy Associate Director for the Service Center Operations Directorate within DHS’s U.S. Citizenship and Immigration Services (USCIS) since March 2018. In this role, he provided oversight and guidance to more than 6,000 federal staff and contractors who adjudicate immigration benefits across family, employment, and humanitarian business lines.

Previously, Mr. Colucci served as the USCIS Chief of the Immigrant Investor Program Office (IPO), a position he assumed in December 2013. As Chief, he led IPO’s staff of adjudicators, economists, and fraud detection and national security specialists in administering the employment-based, fifth preference (EB-5) visa program. During his tenure, he took numerous steps to improve the integrity of the EB-5 program, including by establishing a compliance division to assess regional centers’ continued adherence to applicable laws and regulations, piloting interviews of certain petitioners, and expanding site visits to EB-5 funded projects. In 2016, he received a Presidential Rank Award for these achievements.

Mr. Colucci joined USCIS after more than 21 years at the Department of the Treasury with the Bureau of Alcohol, Tobacco, Firearms and Explosives (ATF) and Financial Crimes Enforcement Network (FinCEN). At FinCEN, he served as the Associate Director for the Analysis and Liaison Division, where he produced cutting-edge and multi-source financial intelligence products for the law enforcement and intelligence communities. Before FinCEN, Mr. Colucci served as ATF’s Deputy Assistant Director in the Office of Public and Government Affairs, bringing to the position his experience as an inspector as well as from various other leadership and management positions at ATF. Among other things, Mr. Colucci’s law enforcement and regulatory experience at ATF and FinCEN included managing diverse teams dedicated to increasing industry compliance as well as combatting fraud, terrorist financing, firearms trafficking, and money laundering.