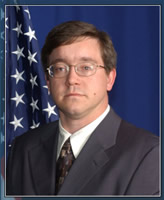 Ronald N. Hancock currently serves as the Deputy Assistant Administrator, Field Operations where he is responsible for oversight, direction and coordination of Field Operations functions associated with TTB's tax collection and consumer protection programs. Previously, Mr. Hancock served TTB as the Director of the Tax Audit Division and was responsible for the planning, development, and monitoring of the bureau's excise tax audit program for TTB's regulated industries.

Mr. Hancock began his government career in 1991 as an auditor with the Department of Energy's Office of Inspector General in Chicago, IL. Over the ensuing 12 years with the Office of Inspector General, he held a variety of audit and supervisory positions. In February 2003, he joined TTB as the Acting Director of the Tax Audit Division and in September 2003 was selected as the Director of Tax Audit Division.

Mr. Hancock graduated from Augusta College (now Augusta State University) with a bachelor's degree in Accounting in 1990. He is a Certified Public Accountant (CPA) and is a member of the Institute of Internal Auditors.